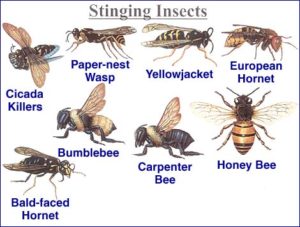 Most people have local redness, swelling and some itching when they are stung by insects.  However, there are a few that are allergic and when they are stung, they experience more symptoms including: hives, swelling of the tongue and throat, difficulty breathing, nausea, vomiting, abdominal cramps, diarrhea, and fainting as the result of a drop in blood pressure which could lead to shock. This type of reaction is called anaphylaxis which is a medical emergency.

These people, after being stung, produce antibodies called immunoglobulin E (IgE), and with subsequent encounters with same the insect, the venom interacts with the IgE antibody, triggering the release of substances that cause an allergic reaction. One of these substances is called “histamine”.

The usual insects responsible for allergic reactions are:

Honeybees:  non-aggressive and they attack when they are provoked, but Africanized honey bees (Killer Bees) found in the southwestern US are more aggressive. Domesticated honeybees live in man-made hives. The wild ones live in colonies (honeycombs) in hollow trees or cavities in buildings.

Yellow jackets:  have yellow and black stripes, their nests are usually under the ground, but sometimes, can be found in farm buildings, masonry cracks and woodpiles.

Paper wasps:  usually they have brown and yellow stripes and are a bit larger than yellow jackets. Their nests are usually made of a paper-like material, often located under the eaves, behind shutters, woodpiles, and sometimes in pipes.

Hornets:  usually larger than yellow jackets, their nests are also made with a paper-like material close to that of yellow jackets and wasps, above the ground in tree hollows, tree branches and shrubs.

Fire ants:  build nests from dirt in the ground, usually visible above the ground sometimes as high as 18 inches.

Avoid these insect’s nests. If their nests are disturbed they are very likely to sting you. Have their nests, in your living area, professionally destroyed.

If you find a flying insect close to you, avoid sudden movements and try to get away calmly and slowly. Foods attract some insects. Do not leave uncovered food outdoors before you eat them. When outside, avoid bright clothing and perfumes. Avoid open-toe shoes and loose-fitting clothes, as insects can become trapped in them.

For a local reaction, apply cold compresses and raise the affected limb to reduce swelling. Gently clean the area with soap and water. If the stinger is left on your skin, do not try to grab it and pull it out. That could squeeze more venom into your skin. A quick scrape with a knife or your finger nail can remove it. You may use a topical steroid cream or ointment at the site to reduce itching. If you suspect that the site is getting infected, see your physician.

If you are severely allergic to insects

You should always carry an Auto-Injected Epinephrine device.  You must learn when and how to use it. Check its expiration date every couple of months since it does not have a long shelf life. Remember epinephrine is a rescue treatment. You must still have someone take you to the emergency room.

If you are highly allergic to insects, consulting an allergist is strongly recommended. Quite a few people have no idea what insect they were stung by or have the wrong impression about the culprit insect. With proper testing, your allergist can diagnose an insect allergy properly and with the right treatment and hypo-sensitization injections you can be much more confident and enjoy being outdoors.

The FDA has approved AIRSUPRA (albuterol and budesonide) which is the 1st inhaler with a combination of an inhaled corticosteroid (ICS) & a short-acting beta-agonist (SABA). This is not a controller medication but is a rescue medication - can be used as needed for asthma symptoms. Click here to read more: buff.ly/3w5eZxZ #asthma #FDA #AAAAI ... See MoreSee Less

Our Gainesville office location is 217 N. Weaver Street, Gainesville, TX 76240. We are open at this location on Tuesdays and Thursdays for telemedicine appointments and in person visits, allergy shots and/or biologics. We are proud to serve you and the Gainesville community. ... See MoreSee Less

Happy New Year!! From our North Texas Allergy Asthma Center Family to yours! Hope you have a wonderful start to 2023! In honor of the holiday, our offices will be closed on January 2nd 2023. We will reopen our usual business hours on Tuesday, January 3rd, 2023. ... See MoreSee Less 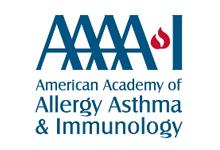